Mapping Out A Pro-Life Canada: Part 1: The West.

Here are some reflections on our experiences in the great Canadian West.


First, some thoughts on our great country's heritage. Canada is a Christian nation. By this I do not mean that this country was or is governed by theocrats, nor do I mean that all its citizens are on fire for the Christian faith. I mean that this land was claimed for God by the first explorers, and He blessed them in their adventures and missions by allowing this land to grow up in a thriving Christian culture. Conversions were made. Churches were built. Schools and hospitals founded. Canada was explored and built by Christians. We on Crossroads aim to revive Christian culture, especially with regards to respect for the dignity and sanctity of all human life. This land was claimed for God, and yet the light of faith has been dimmed. A simple look at abortion statistics (around 100,000 a year in Canada) shows that we have to turn on the lights again, as it were.

The Canadian West was explored by such men as David Thompson, who was the first man to cross the Rockies. Everywhere he went, he proclaimed the Gospel. He mapped over 3.9 million square kilometers in his lifetime - an unimaginable feat accomplished by one man. Thompson read the Bible to Indians he met. He spoke of Christianity as "giving force to morality." This great man literally walked and canoed West, spreading the Gospel as he made his maps. Our Crossroads team started where he left off, and we are heading East towards the secular wasteland of Quebec and the battleground of Ottawa where abortion laws were struck down in 1988. Using GPS and atlases, we are trekking for life, like Thompson did. 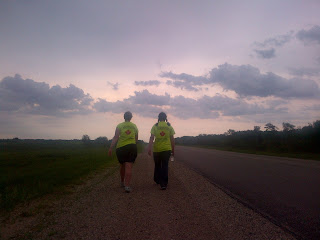 The western provinces have been very good to us. The response to our mission in British Columbia was moderate, though still more positive than negative. The mountains gave our legs and feet trouble but once we emerged from Banff National Park in the Rocky Mountains into Alberta, we felt much better. The instant peace and quiet provided to us by our evening walks in the fields provided a refreshing change from the mountain air. The reactions of drivers were immediately more positive than in BC. We received many thumbs-up and honks. People stopped their cars and talked to us and gave us donations. Saskatchewanians were very generous, and the amount of positive responses topped Alberta's. Manitoba was good to us as well. While we were only there for a week, reactions were mostly positive. While praying at the abortion clinic in Winnipeg, things were much more confrontational than on the road, but we still got many honks and well-wishes.

We are now in Ontario, walking out of Thunder Bay. We are almost one month away from reaching Ottawa, my hometown. This is the longest walk home I've ever experienced!

In conclusion, I am comforted by the fact that God willed Canada to become a Christian nation through explorers missionaries who quite literally walked and boated across the land. They went West. We are going East. A Christian culture, a culture of life, can happen again because it happened before. God is on our side.

God bless you all. Please keep the team in your prayers!